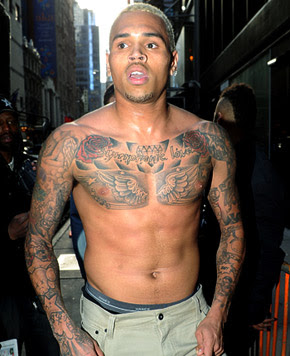 This morning, Chris Brown made a scheduled appearance on ABC‘s Good Morning America, to promote his new album, F.A.M.E.*

When the interviewer, Robin Roberts, touched on the topic of Brown’s 2009 “domestic incident” with then-girlfriend, Rihanna, his blood began to boil.

Robin was pretty nice in her approach to questions about the 2009 beating incident. She didn’t press the issue too hard, and didn’t even mention the actual beating part; she simply asked Mr. Brown about the restraining order that Rihanna had against him (which was relaxed in February, so that Brown must now stay just 10 yards away from Rihanna, lowered from the initial 50 yards).

However, Brown continually skirted her questions, instead insisting that “everybody go get that album,” and growing more and more angry and fidgety as the interview continued.

Here’s a video of this morning’s interview:

At the very end of this video clip, Chris Brown states that he does everything for his fans, and that he “could care less what anybody else thinks”. This oft-misused saying really grinds my gears. Clearly, Chris Brown meant to say that he “could not care less”. WHAT an idiot. His whole “I’m the victim” mentality, and stupid, arrogant statements aside, this is the biggest issue I have with his GMA interview. But moving on…

Apparently, Brown grew so angry during the interview, that after an incredibly auto-tuned performance of his single, “Yeah 3X,” he stormed off the stage, stomped off to his dressing room, and proceeded to throw a big ol’ temper tantrum. Brown raised such a ruckus in his dressing room, that the show’s hair and makeup staff got scurred, and called security.

Brown then decided to ditch his shirt, skip a second performance, which he was scheduled to record for ABC’s website, and get all up in the grill of one of GMA‘s segment producers.

Clearly, Christopher Maurice Brown’s former anger problems are a-okay and gone away; a thing of the past.

After Chris Brown and “Team Breezy” left the building, it was discovered that, in his fit of rage, Brown had used a chair to smash one of the exterior windows in his dressing room. (ABC News has confirmed that the window was shattered, which is visible from outside of the building, at 43rd street and Broadway, in Manhattan.)

Here’s a pic of the broken window: 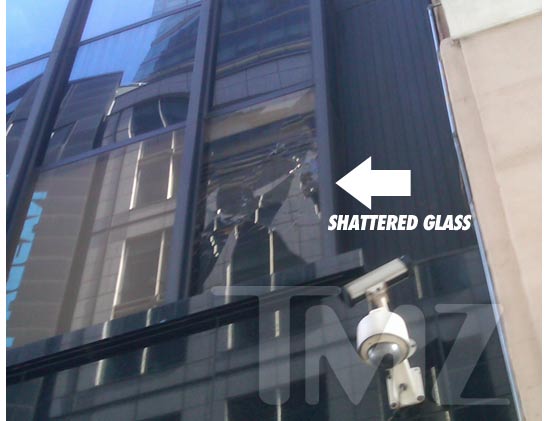 And now, a little BONUS…

For a fist-pumping good time, watch this video of Chris Brown’s GMA performance: