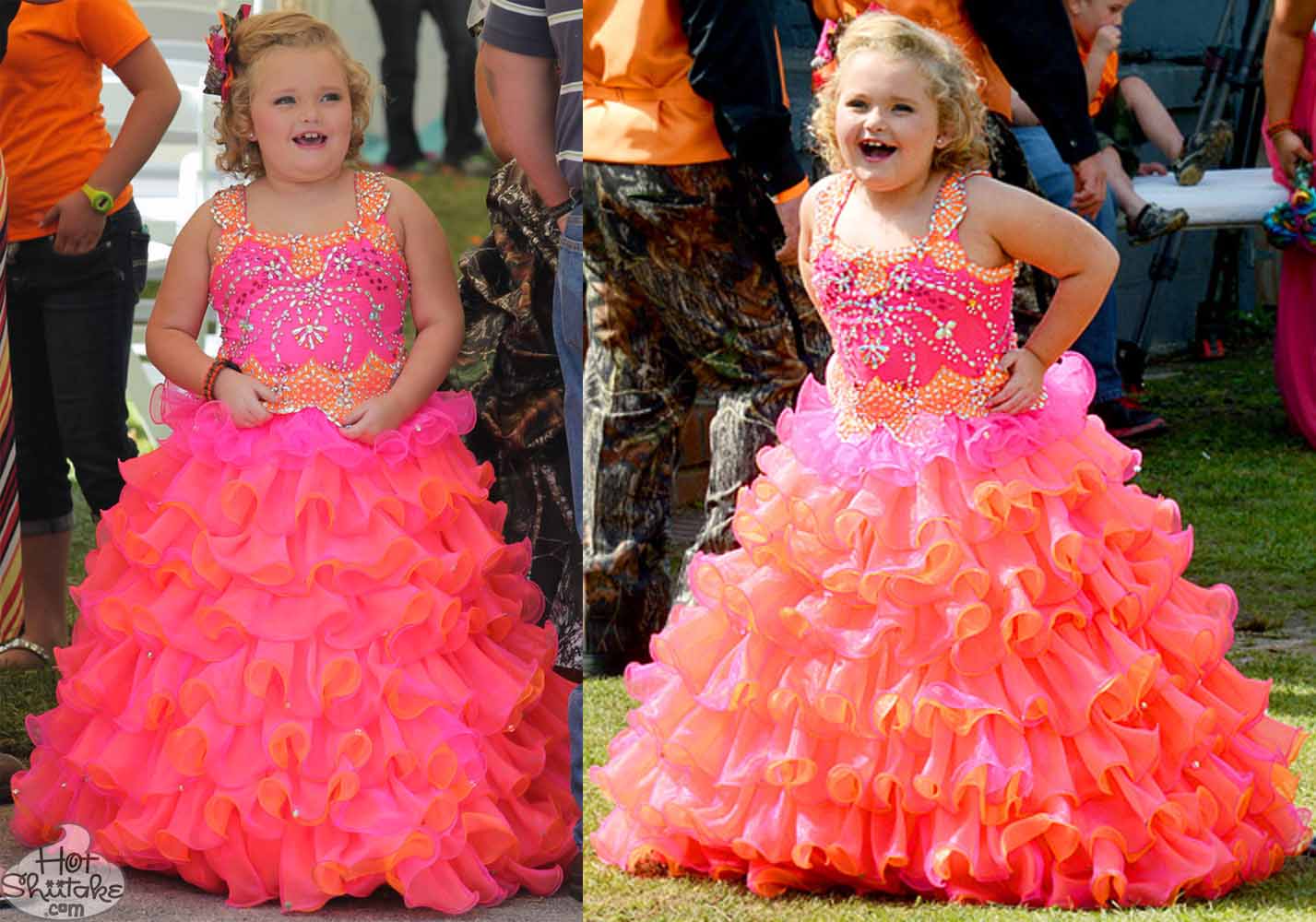 A Honey Boo Boo Wedding … In Camo, Of Course

June Shannon (AKA Mama June), 33, the Boo Boo matriarch, got married to her longtime love, Sugar Bear (real name: Mike Thompson) on the stretch of grass between the Honey Boo Boo home and the train tracks that run through their backyard (because, yeah, the Honey Boo Boos keep it classy).

The Honey Boo Boo wedding had a camo-chic theme, and June Shannon’s wedding dress was a big, poofy, camouflage A-line bridal gown with pillowy pickups — accented by bright orange tulle “delicately” peeking out from beneath the skirt, topped off with a bright orange sash tied around the waist — you know, to accentuate Mama June’s umm… curves. Oh, and we can’t forget about the sparkly tennis shoes June paired with her dress, tying the whole look together perfectly. 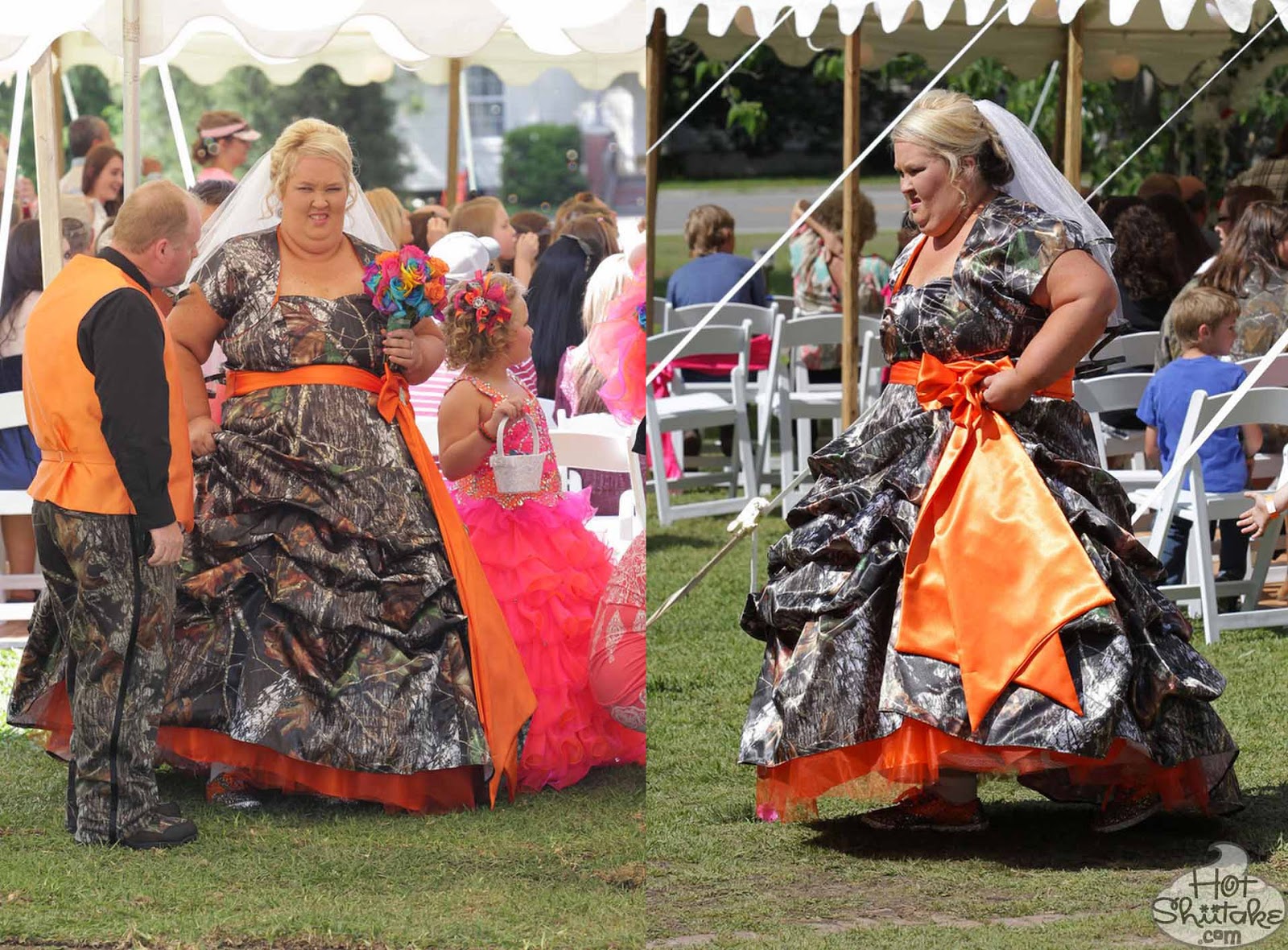 By the looks of it, Mama June is going hunting. For bears. Sugar bears.

June Shannon once eloquently stated that “you have to take pride on how you look,” (yes, “on”) and, in regards to her own looks, said:

“Granted, I ain’t the most beautimos out of the box, but put a little paint on this barn and shine it back on to its original condition, ’cause it shines up and looks like it’s brand new.”

Mama June and Sugar Bear have been dating since May 14, 2004 (for you mathematically challenged, that means they’ve been together for almost nine years), so why they didn’t just wait a few more days to get hitched on their anniversary is beyond all reason… but it seems Sugar Bear could, all of a sudden, wait no longer to make an honest woman out of Mama June.

Of their nuptials, Mama June stated:

“My sister baked the cake, and we spent most of the money on barbecue. We stayed true to our roots and made the focus on the family and my commitment to Sugar Bear. You can definitely plan an event on a budget!”

After the ceremony, June and her new hubby left their wedding on an ATV. 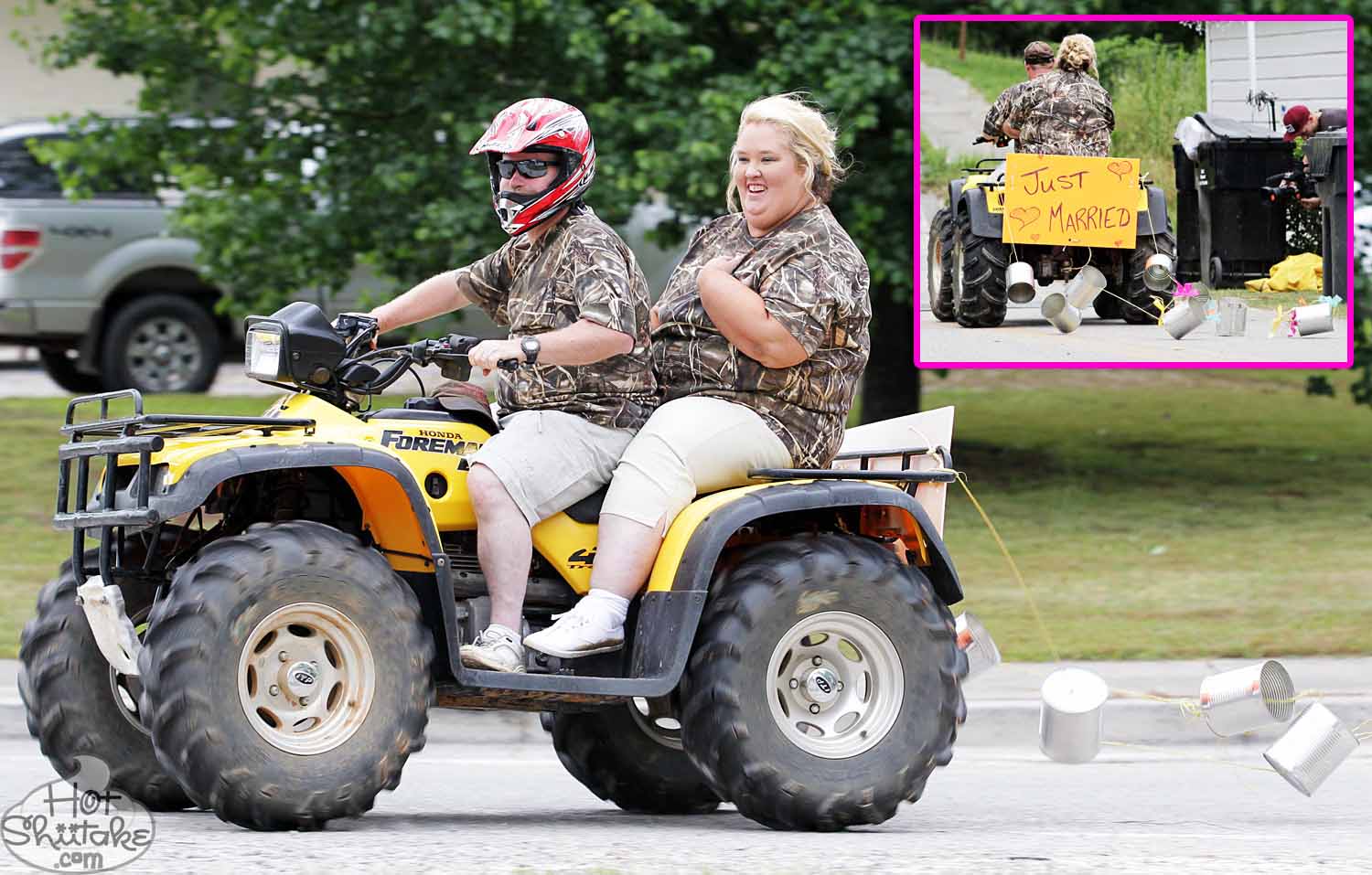 If you don’t know the Honey Boo Boos (of TLC’s Here Comes Honey Boo Boo), then, perhaps you should get out from under the rock, beneath which, you live, a few more times a year.

Here Comes Honey Boo Boo has given us a rare glimpse into the all-too-real lives of people living in an area of the United States few Northerners (AKA Yankees) have dared to venture — a region far south of the Mason-Dixon line, previously virtually unknown to civilized man: McIntyre, Georgia, where the Honey Boo Boo brood resides, under the watchful, couponing eye of their larger-than-life matriarch, June Shannon.

Mr. Sugar Bear plays the role of baby daddy to Ms. Shannon — now Mrs. Bear Thompson — as he is the father of Miss Honey Boo Boo herself, Alana Thompson, a 6-year-old girl who is a strange combination of a genius and a crazy, hyperactive little girl. Oh, yeah, and a “diva beauty queen”.

Alana’s words have made her the most lovable redneck child in the country, and she is best known for saying things like “A dollar makes me holler, honey boo boo,” “those other girls MUST be crazy, if they think they’re gonna beat me, honey boo boo child,” and “I rocked my Daisy Duke… I showed my belly to the judges… Look at this big thing… They don’t know a good thing when they see it.”

Yet, the glimpses of Alana’s lesser-praised moments are what show her true genius. When Alana spilled a bunch of cheesy puffs on the floor, Mama June made her pick them up. Apparently, Alana thought they should still eat the cheesy puffs off the floor (five-second rule, anyone?), because when Mama told her to throw them out, Alana protested, “We’re just throwin’ away money! Throwin’ it down the drain!” Compare this to her sister, Chubs, who thinks she can “lose a lot of weight” by farting 12-15 times a day, or her sister, Pumpkin, who asked the etiquette coach, in all seriousness, if farting at the dinner table was considered rude…

A child wise beyond her years, Alana is clearly a young genius growing up in unfortunate surroundings — like a Matilda of the dirty South.

A picture may speak a thousand words, but actual words speak even more words… so get excited, because the Honey Boo Boo wedding will air on season two of TLC’s Here Comes Honey Boo Boo, which returns July 17. Git ‘xcited, ya’ll.