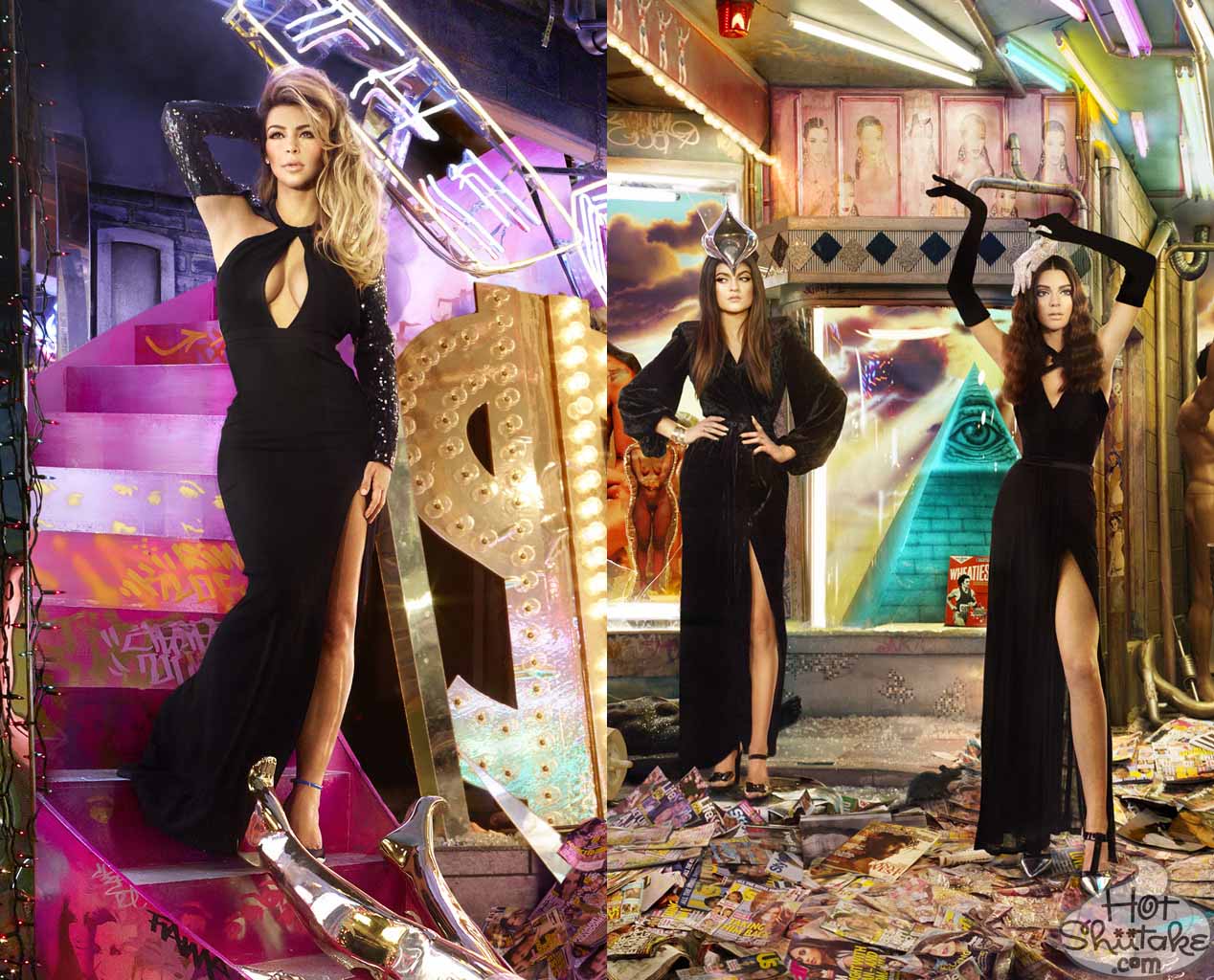 The fabled Kardashian Klan (kind of like the Ku Klux, but less lynch-y) have released their annual Christmas card: 2013 edition — and my, oh my, what a site for sore eyes…?

Click to zoom, so you can behold all of the so-called Christmas fun in all its glory.
Credit: David LaChapelle

The Kardashian ladies have truly outdone themselves this year, releasing their kraziest kard to date. This festive card has quite literally left us stunned speechless, but never fear, we will somehow find a way to find the words with which to convey our thoughts on this most important piece of world news.

The Kardashians Women Can Keep Themselves Warm This Christmas, Thank You Very Much

It appears that the Kardashians have had enough of their men’s wayward lives (what with Lamar Odom’s alleged crack addiction, Scott Disick‘s general douchebaggery, and Kanye West‘s busy schedule of attacking paparazzi), and have kut them out of their kard entirely (well, Brucey-Bruce made it in there, but he looks like a woman, so he doesn’t really count). Not even Rob Kardashian was allowed to make an appearance. Too fat, probably.

Yes, it seems the Kardashian women are i-n-d-e-p-e-n-d-e-n-t and have tossed their respective men to the side, opting instead, to include their own faces countless (kountless?) times, for good measure. We’re pretty sure Kim is actually in this kard at least ten times — possibly upwards of 100 times (we didn’t kare to keep kount)… it’s so hard to tell who the favorite child is. (If you’re trying to spot the many occurrences of Kim Kardashian‘s countenance in this card, look at the stairs upon which Kim stands, at the pink wall above the Illuminati eye behind the Jenner girls — we’ll come back to the Illuminati eye in a minute, don’tchu worry — at the back wall in the center by the nudist mannequins, and probably elsewhere — we’re on a deadline here and don’t have time for thorough examination; plus, our eyes hurt just looking at this circus sideshow.

Because this tired Vegas act is really hard to take in all at once, let’s look at this warm, fuzzy Christmas masterpiece bit by bit, shall we? (We shall.) 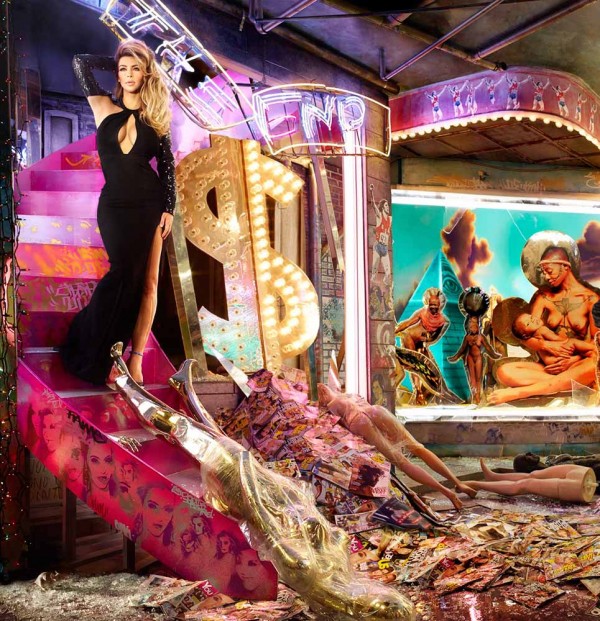 Kimmy gets a whole third of this card to herself, because, if not for her and that glorious sex tape (up top, Ray J), where would this family be? And Kim is standing next to a gigantic dollar sign, natch — after all, money is the glue that holds this family together, is it not? Oh, and the eerie “THE END” written by her head? Perhaps they will be killing Kim off in the next season of Keeping Up with the Kardashians. We’ll have to tune in to find out.

Kendall & Kylie Jenner: The Next Generation Of Drama Queens 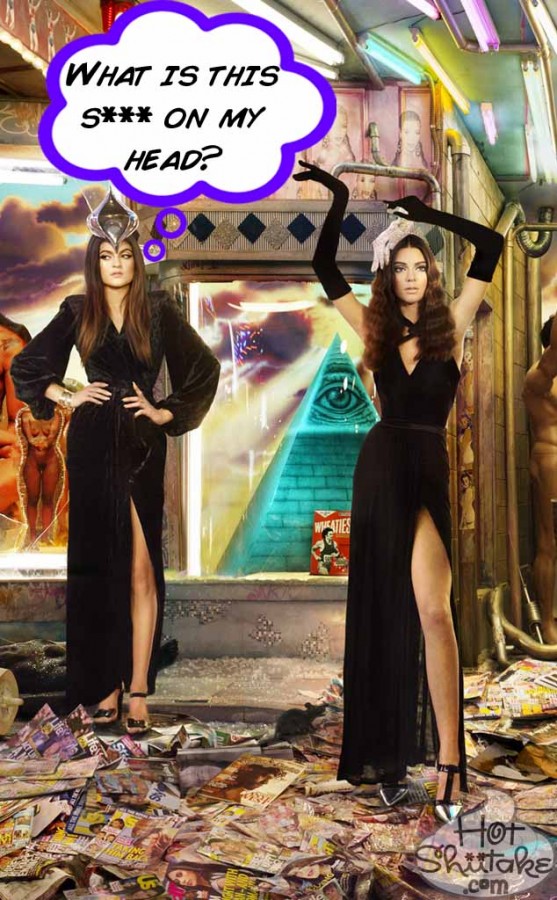 Kylie Jenner clearly can’t deal with the weird hat-like structure atop her head, but her sister, Kendall Jenner, ever the true model, steals her younger sister’s shine and werqs it out with whatever that pink glittery puke-bomb is on her head. Oh, and let’s not forget to notice the fact that the Kardashians-in-training are standing on top of a pile of Kardashian-covered gossip rags. Nice. 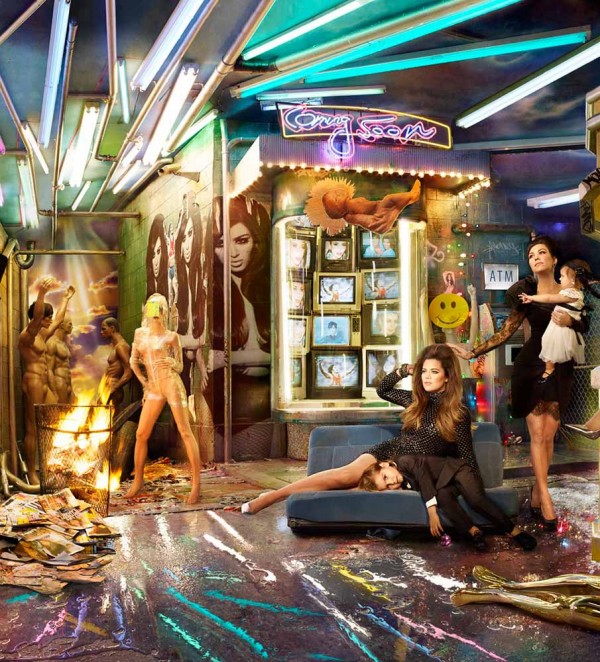 Of course Kim found a way to invade Kourtney and Khloe’s section of this card. CAN THEY HAVE NOTHING FOR THEMSELVES? 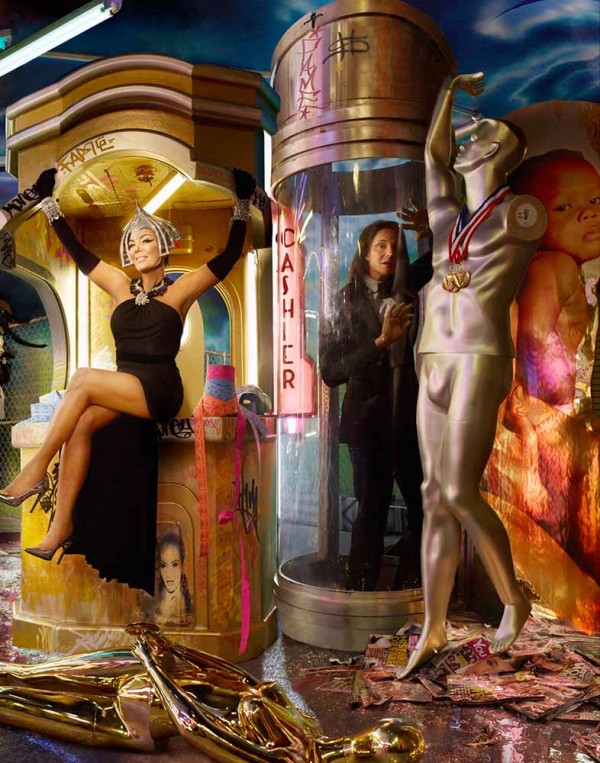 So, Kris Jenner and Bruce Jenner might be separated, but BJ did father two of Kris’ children (unless there’s some soon-to-be-revealed baby daddy scandal we don’t yet know about), so he can still be in this year’s card — we’ll just keep him trapped inside a glass jail cell, where he belongs. Oh, and we’ll give his Olympic medals to a one-armed mannequin with a sizable bulge (is Kris having an affair with Bulgey?!?)

The Kardashian Christmas card is a tradition that dates back to a time before Christ. Or something like that. Who knows why the world cares so much about how the Kardashians send their season’s greetings each and every year, but we do. We really, really do. The family’s card has never been so outlandish before — usually, the family puts their egos to the side (sort of) to celebrate the birth of the baby Jesus with a nice, tame family photo. Blah, blah, blah, whatever. We’ve really talked ourselves to death on this one. Let’s just look at the family’s cards of yore, ok?

Lol, JK. You’re gonna have to click through to a separate posts to see their cards of Christmas past. Here ya go: Kardashian Family Christmas Cards Over The Years

* Deepest apologies for the extreme k-ification of words at every possible opportunity. We simply kouldn’t help ourselves.
** We never got back to the Illuminati eye. Whatevs. That basically speaks for itself.