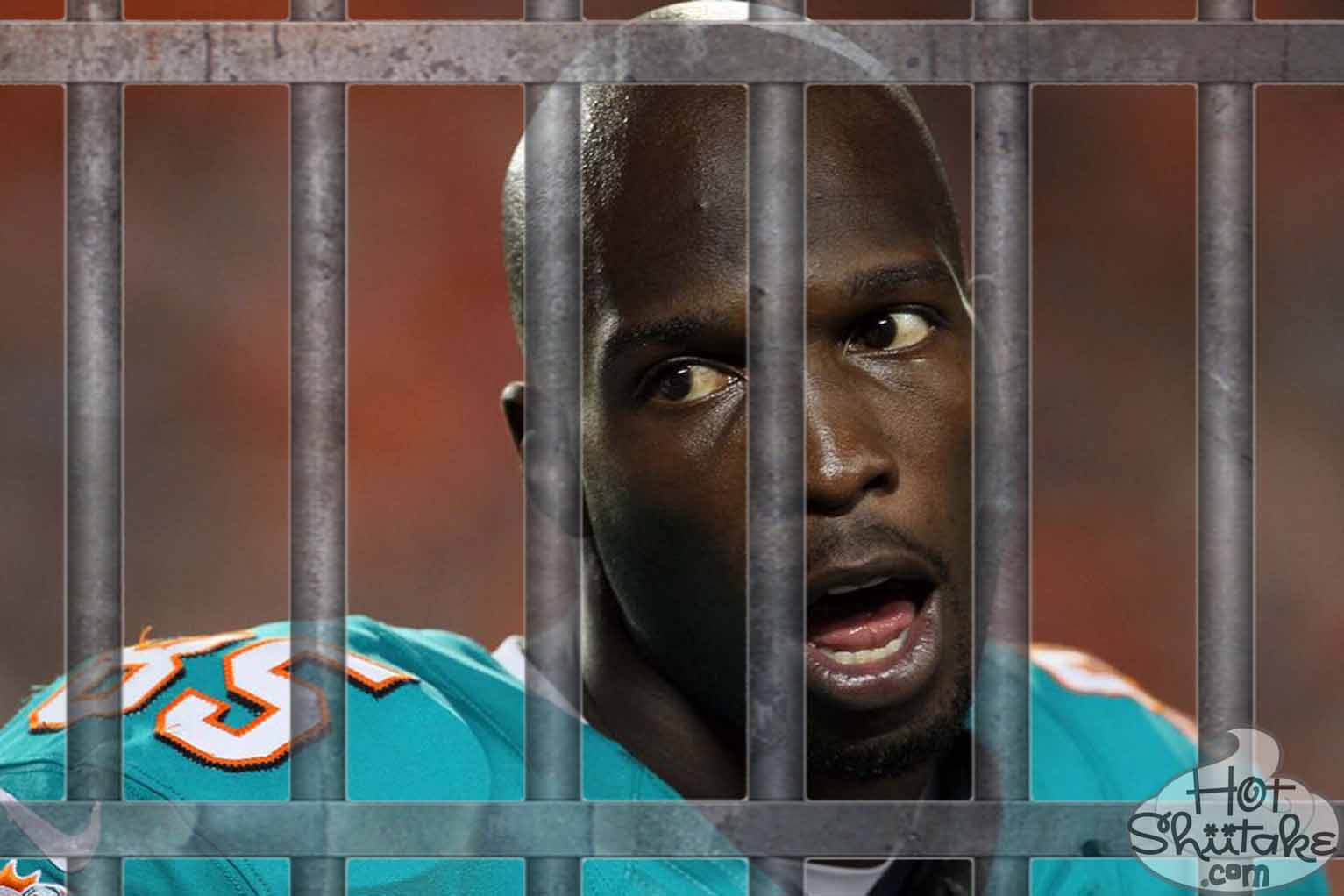 Fallen NFL star, Chad “Ochocinco” Johnson, has been sentenced to 30 days in jail… because he slapped his male lawyer’s butt in court.

Ochocinco, 35, was in court today, June 10, 2013, for a probation violation hearing stemming from a domestic violence case (As you’ll recall, Chad Johnson was arrested on August 11, 2012 for head-butting his then-wife, Evelyn Lozada, during a heated argument that started when the reality star found evidence that her NFL husband had been cheating on her during their short month of marital bliss. After the head-butt, the Miami Dolphins immediately released Johnson, and he hasn’t played in the NFL since.). Ocho turned himself in on May 20 after failing to meet with his probation officer (the ex-NFLer pled “no contest” to a misdemeanor domestic battery charge one month after his initial arrest).

According to the AP, Johnson had reached a deal with prosecutors,  and was on the verge of being granted a no-jail plea deal (which called for community service and counseling, instead of time in the slammer), when he committed a grave error: he slapped his lawyer, Adam Swickle, on his hiney. ARREST HIM!! (Oh, wait… they did. We’ll get to that part in a bit.)

Here’s how it went down: Broward County Circuit’s Judge Kathleen McHugh asked Chad “Ochocinco” Johnson if he was “satisfied with the assistance of [his] attorney,” to which, Ochocinco replied that he was, saying, “He’s awesome.” Then, after the judge concurred and proceeded to ask Chad if he had any questions for Mr. Swickle, Chad swatted his attorney’s butt, as football players often do to their teammates on the field. Mr. Swickle appeared to chuckle and laughter rang out through the courtroom…. which did not please Her Honor.

“Mr. Johnson, I don’t know that you’re taking this whole thing seriously. I just saw you slap your attorney on the backside. Is something funny about what’s going on here, today?”

Mad Chad smartly replied, “No, ma’am,” but the judge was not deterred, continuing:

“But the whole courtroom laughed, because you just slapped your attorney… on the backside.”

Despite the best efforts of Ochocinco’s attorney to diffuse the judge’s anger, McHugh decided to deal Ocho a devastating blow and rejected his plea deal.

After feeling the judge’s wrath, Johnson tried to apologize for the butt swat, saying:

“This is your courtroom. I have no intent to make this a joke. It’s not funny… My life is in a shambles right now and I try my best to laugh and keep a smile on my face.”

The judge, feeling no sympathy and acting arguably irrationally and vengefully, was not swayed by Chad’s apology, and he was handcuffed and whisked off to jail.

Behold: the butt slap seen ’round the world.