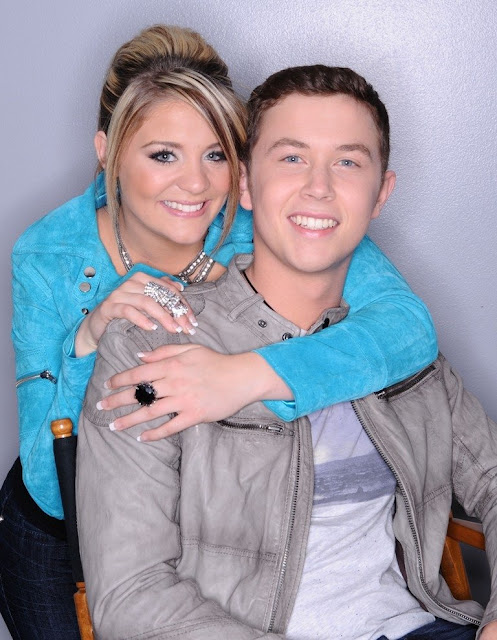 What a hot load of garbage! I’m back from my week-long American Idol strike, and for what? This?!? What a waste, what a true waste.

Thankfully, last night’s episode was only an hour long. If I had to sit through any more of that dull crap, I probably would’ve started carving my own wrists, just for some form of entertainment.

The results from part two of the American Idol Season 10 finale are in.
SPOILER ALERT: Scotty McCreery won. Don’t like spoiler alerts? That’s OK. It’s too late to complain about it. Shoulda said something earlier, dum-dums.

See the update at the end of this post, to see what’s next for American Idol.

The most exciting part of last night’s American Idol epidsode was probably my frantic drive home at 6:59pm. I was super excited to see if Lauren was going to perform or not, after all the hype surrounding her “lost” voice. Girrrl, please. I bet she was sobbing backstage, as usual.

I wish Haley had taken Lauren’s spot last night, maybe the performances wouldn’t have been quite as coma-inducing.

Anywho, onto this whole recap thang.

Round One: Scotty McCreery & Lauren Alaina Reprise Their Favorite Songs

In the first round, Scotty McCreery and Lauren Alaina performed their favorite song from their past performances this season. Pretty self-expanatory.

The songs performed in round two were chosen for the contestants by their very own “idols”. How cute.

The songs sung in the final round of the first part of the Season 10 American Idol finale (whoa, that’s a mouthful) will be the winner’s first single. How exciting, right? No, how very, very dull.

So, Who Will Win American Idol Season 10?

Hot Shiitake’s bets are on Scotty McCreery. Lauren Alaina — although she is almost as dull as Scotty McCreery — gave slightly better performances last night; but Scotty has schemed his way into the hearts and minds of every little girl in the country. He’s even hypnotized a good number of our country’s not-so-intelligent women. What a bunch of simple-minded floozies.

Whatever. See you tonight, after the results are revealed in Part 2 of the American Idol Season 10 Finale.

As I stated in the first update, Scotty McCreery has won American Idol. (Boo. Hiss.)

I think earlier this season, I said something along the lines of:

I’m not making any threats or anything, I’m just sayin’…

Kelsey Grammer: Father of the Year