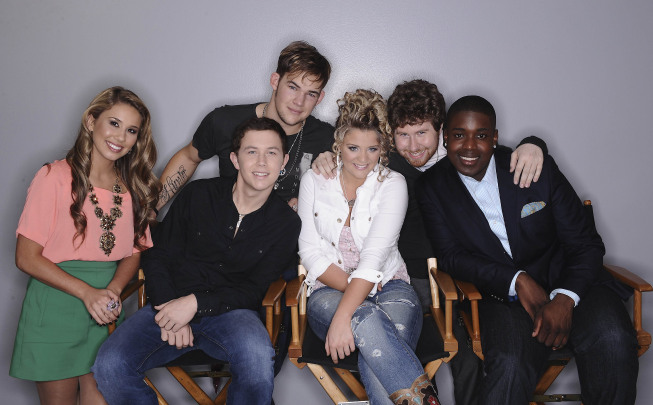 Remember: With only 6 contestants remaining, HALF of them will be in this week’s bottom three. Terrifying, right?

As contestants are slowly weeded out each week, more and more of American Idol‘s 90-minute time slot opens up, and it simply must be filled. How WILL they do it?

Last week, American Idol producers filled the time by forcing us to watch a terrible group performance given by the already-forgotten contestants of yore. But this week, the producers decided to give us something a little better!

The American Idol kiddos were paired according to who would be most likely to fall madly in love, in order to potentially create even more buzz around the show – This includes the pairing between James and Jacob. (James was probably sad that he didn’t get to sing his duet with his bestie, Stefano.)

Wanna Know Who Got Voted Off American Idol Tonight?

The American Idol voting results are in for the Top 6…
The results were shocking and sad. So very sad. Although, little idiot girls around the country are probably elated. (Full update at the bottom of this post.)

If you don’t agree with this review, you are obviously a tone-deaf moron, and represent all things hated by all people.

Casey bid us farewell. Farewell, talent. Farewell.
According to Ryan Seacrest’s Tweet, the “Bottom 3” revealed in this week’s American Idol Top 6 Results Show was not actually the Bottom 3, but a randomly selected 2 contestants, plus Casey, who bid us farewell.

Kate Middleton Gets on Her Knees at the Royal Wedding — Yeah, Girrrl