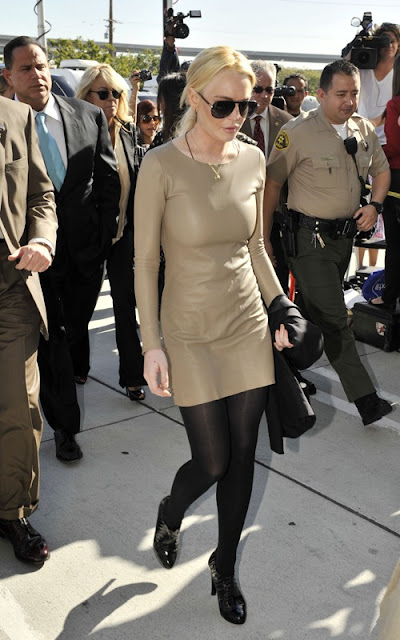 LiLo decided to go twinsies with the police officer.

Lindsay Lohan appeared in court today, March 10, 2011, for a hearing on her felony grand theft case — you know, because she allegedly stole a $2,500 necklace from a jewelry store in Venice, California. As expected, Lindsay Lohan was granted a continuance at her court appearance this morning, which means that we don’t get to find out how much jail time she will receive until March 25. Ho hum, pig’s bum. Why must our patience be tested so?

Even though the court date is set for March 25, Lindsay only has until March 23 to decide whether or not she will accept a deal, and submit a plea of guilty or no contest.  If she accepts the plea deal, she will receive her sentencing on March 25.  If she does not accept the deal, the case will be tried on April 22 at 9am PT, and a new Judge will decide her fate.   If it gets to that point, her preliminary hearing will be heard concurrently with her probation violation case.  In other words, the new judge will decide if there is enough evidence to go to trial with the necklace case, AND decide if Lindsay is in violation of her probation from her DUI case.

Either way, Lindsay will almost assuredly face jail time, due to the conditions of her probation.  Currently, the plea offer on the table includes SIX MONTHS IN JAIL!  Wowza.  Lindsay’s lawyer may be able to negotiate it down, but we’ll just have to wait and see!

Legal stuff is HARD!  So now on to the important stuff: WHAT WAS LINDSAY WEARING?

LiLo wore another form-fitting, long sleeve dress; this time, in beige leather.  I think she looks pretty good!  Personally, I’m a fan of Lindsay’s style.  She just needs to lay off the crack pipe.  I give this dress 2 days tops before it sells out.  I’d buy it.

One comment on “Lindsay Lohan: Another Court Date, Another Tight Dress”