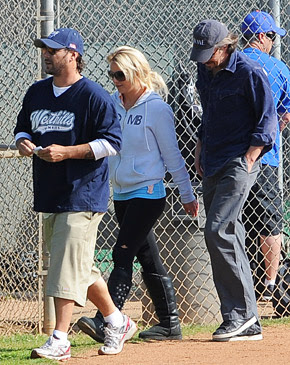 Sparks could be flying again…

Britney Spears and her ex, Kevin Federline, were spotted together yesterday, March 13, 2011…

So, Are Britney Spears and Kevin Federline Back Together?

Nope. Sorry for getting you so excited.

However, the exes did put their differences aside to go to their son’s Little League game in Los Angeles. Their son, Sean Preston, is now 5, and K-Fed is one of the coaches for his team. That thought’s a little scary; but whatevs, LA is a dangerous place.

Us Magazine has a “witness” who says Britney Spears and Keving Federline “kept their distance from one another and didn’t speak.”… [1]

But PopSugar states that “Brit briefly chatted with her ex”. [2]

WHAT are we to believe??? Who can we trust? This is tearing my innards apart!! How can any of us go about the rest of our days without knowing if Brit-Brit and PopoZao spoke to each other or not?!?

This was the first time Britney Spears and Kevin Federline have been pictured together since their divorce in 2006. How heart-warming is it, that after 5 years, the two can finally be civil with each other? Very heart-warming. Lifetime-movie-heart-warming.

Both Britney’s man, Jason Trawick, and K-Fed’s girlfriend, Victoria Prince, were also present at the game. They were probably VERY worried about the extremely high possibility of a BK reunion.

WATCH: Kevin Federline — The One ‘n Only PopoZao

Ok, now for some real fun. Here’s a video of K-Fed getting REALLY into his cancelled single, PopoZão. Seriously, watch the whole thing, it’s freaking great.

“That’s the one to get it all started right there”
[1]“FIRST PIC: Britney Spears & Ex Kevin Federline Reunite” Us Magazine 14 March 2011.

One comment on “OMG!! Are Britney Spears & Kevin Federline Together Again?”